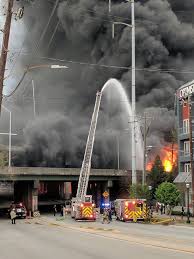 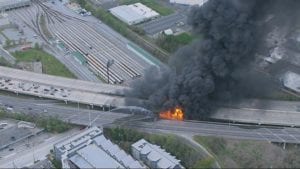 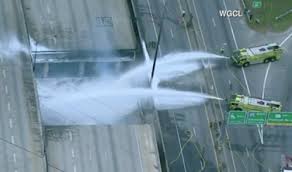 As most people know by now, the city of Atlanta, Georgia was the scene of a major interstate collapse on Thursday. Photos show the road simply dropped down to the ground beneath it. Reports state that the road collapse was caused by a fire beneath it, which was not the result of any type of criminal activity. The several-lanes-wide section of a major thoroughfare will have to be completely replaced, and there is no timeline for the effort to begin or end as of now.

A simple Google search results in numbers of announcements about what roads are closed and where the detours are. Since no one was hurt, it appears that there was no moment “too soon” to start making jokes, either, as Twitter is full of commentary about who started the fire that caused the collapse and how this is the new site for a sports stadium.

One thing is for sure, though. This is scary. Last year, the Cincinnati area saw its own share of road collapses. People can be killed and injured, vehicles destroyed, millions of dollars lost.

As folks involved every day with truck drivers, HG Logistics has a vested interest in the safety of our roads. We want to take just a moment to be thankful that no one in Atlanta was injured. We also want to remember that we rely on our drivers and their safety daily. Our thoughts are with our drivers today and every day that they remain safe. Our thoughts are also with all of the drivers in Atalanta who are going to no doubt be inconvenienced and irritated as a result of this mess!