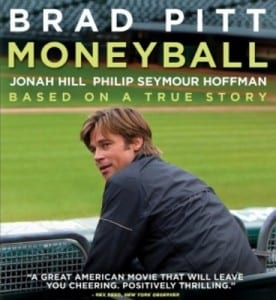 Easter is upon us, the weather is warming and spring is in the air. For me, that means one big thing: baseball season. Instead of inundating you all with stories of amazing plays and once in a lifetime experiences from watching my kids play ball, I want to tell you about a movie that I love. I don’t think it gets the praise that it deserves for the story it tells; Moneyball. Yes, it started as a book, but I watched the movie, so that’s what I’m going to talk about. Moneyball has taught me a lot of lessons in life, both personally and professionally.

Many professional columnists have weighed in on the Moneyball effect, and to be honest, they say it a lot better than I ever could…here are a few of the takeaways….

Paul Herbert from the website fistfuloftalent.com says “Pay attention:…  Pay attention to who/what is really driving the decisions in an organization.  It’s not always the person at the top of the org chart.” And “Management is about removing roadblocks – not micromanaging.  When Billy meets with the owner about the team and how Billy plans on being successful the owner doesn’t start second-guessing Billy.  He asks a question more leaders should.  He asks… “What will stop you from achieving your objective?”  In other words what are the roadblocks?  The movie doesn’t take it any further from there but in the real world a good leader listens then removes those issues.  Allow your people to succeed.  Don’t do it for them – remove the things that stop them from being successful on their own.”

Jeff Haden of INC. says “‘Your goal shouldn’t be to buy players, your goal should be to buy wins.’ …You need a doer of stuff that needs to get done. So don’t think about buying titles; think about buying outcomes. Think about plugging gaping holes in your company. Are you signing up customers so fast that you can’t respond to all the support emails? Don’t hire a head of support; hire someone that helps you tackle the support issue. Hire someone maniacally committed to customer happiness.That person may someday become your head of support.”

J. Parks Caldwell noted ““I don’t think we’re asking the right question. I think the question we’re supposed to be asking now is, do you believe in what we’re doing or not?” Once you stop believing in yourself, you stop believing in everything, and magic like 20-game winning streaks can never happen. Even if you blow an 11-run lead against the 2002 Kansas City Royals, don’t stop believing.”

We’ll wrap it up with a couple of thoughts by Colleen Sharen, who says “If you can’t win the game, change the game. Beane decided to turn all of the old rules of thumb on their head, identifying under-valued players who had great talent, but that talent wasn’t recognized.” And “Ignore the Stereotypes.  The players recruited by Beane and Brand were under-valued because they didn’t fit the stereotype of a baseball player, yet they performed. Fat, old, strange technique, funny looking, funny looking girl-friends, these were the reasons scouts used for ignoring the players that Beane recruited.” And “Give it a Chance to Work. The first six weeks of the season were a disaster. Nothing went right. Beane stuck to his vision in spite of severe criticism by fans and sports radio.”

Baseball season is here. The lessons we can learn from sport as children carry throughout our lives much of the time. We are not too old to learn new lessons, even from a game of catch.

The next time you’re bored and looking for a movie, consider Moneyball and see if the lessons carry with you. Here at HG Logistics, we don’t have a room full of people with titles. We have a company of doers. People who know what needs done and they do it. We believe in ourselves and our product; our service. We work together to overcome roadblocks…sometimes literally! We work as a team and use lessons to grow and improve. If a company like this is what you’re looking for, contact us. You can reach out to our General Manager, or any of our team players at 513-244-3026.