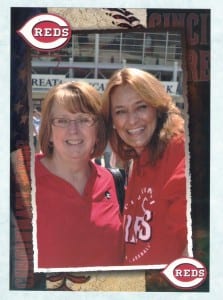 Another week, another blog,

My head is in a hazy fog.

Everything in the norm didn’t make the cut.

I needed change this time.

That’s why I decided to try out rhyme.

You may be thinking I’m a fool,

Or better yet, you may think it cool.

But please don’t stop, read to the end,

A story in the making, I’m about to send.

For HG Logistics is not all about work,

From time to time it has its perks.

Can you guess from the picture in the frame?

A couple employees went to the old ballgame.

An associate gave us 4 tickets for free

To see the Reds play in Cincinnati.

Deserving of some fun, a little reprieve.

The others went to the winners of the game,

The numbers closest or the same.

The lucky ones were Diana and Gail.

They dressed in red from their head to their tail.

Looking alike they could pass as kin,

They rooted and cheered for the Reds to win.

The sun was shining, everything was great,

The seats were perfect, right behind home plate.

And the Reds went on to score run after run.

They hammered away with each stroke of the bat.

They were beating Houston this way and that.

Diana and Gail stayed to see the final score.

The Reds beat the Astros ten to four.

All the way around it was a great day,

A break from work, a time to get away.

Diana and Gail had fun no doubt,

And writing in verse helped end my drought.

Though I have one question I want to shout…

With this week’s blog did I just strikeout?